I’m very fortunate to live in an area where there are always a lot of creative things going on.  There’s the Huddersfield Literature Festival, the Marsden Jazz Festival, and Holmfirth in particular is has reinvented itself as a festival town since the ending of the ‘Summer Wine’ days.  The Film Festival has just finished, following hot on the heels of the Folk Festival.  And next month, from the 14th to the 17th of June, it’s the turn of the Holmfirth Art Festival.

Holmfirth Writers Group, of which I’m a member, has had a long association with the festival and has been involved in many events over the years. This year is no exception. On Saturday 16 June we will be putting on two creative writing workshops in Holmfirth Library: the first, at 1-2pm, aimed at children and the second, 3-5pm at adults (I’ll be involved in that one). Also, some members of the group – myself included – have provided words that are being set to music by local composer Barry Russell for Sing Holmfirth, a choral event with orchestral accompaniment, in celebration of the Holme Valley.

As ever, there will be lots of other things going on too: comedy, music, art, theatre, and plenty of events people can get involved in themselves. Looks like it’s going to be an exciting few days – I can’t wait! If you’re in – or within range of – the West Yorkshire area, why not check out the festival website: www.holfirthartsfestival.co.uk. And if you’re interested in doing a bit of writing, I’d love to see you at 3 o’clock on Saturday the 16th!

Last year my novel The Silence was published by Crooked Cat Books. It’s about a dark secret harboured by a Tuscan villa going back to the summer of 1992 that ended in tragedy – a secret about to resurface into the idyllic life Abby has made for herself and her family in England.

But Villa Leonida has more than one story to tell.

The Secret which is published on 1st June is about a different secret guarded by the same villa. A secret that had a devastating impact on the village and which the discovery at the centre of The Silence now threatens to expose.

I love old buildings and am fascinated by their multi-layered history and the different stories they hold. Villa Leonida has had many lives, experienced several reversals in fortune, and witnessed some shocking events.

In the 1930s Villa Leonida is the most prestigious house in the village, owned by the most powerful family and admired by everyone including Irena and Martina, two girls trying to make sense of the world around them as they grow up in Mussolini’s Italy.

When Martina marries Gianni and moves into Villa Leonida she finds she’s been deceived and life there is nothing like the one she expected.

So when war breaks out and Gianni goes off to fight it’s almost a relief.

But she soon has a secret of her own, one that threatens to destroy her friendship with Irena.

People who have read The Silence will understand how secrets in the two stories connect and recognise a couple of characters. But The Secret is a standalone story so can be read on its own.

The Secret is available in paperback now and will be published in digital form on 1st June 2018.

You can preorder at http://mybook.to/thesecretjohnson

I’d like to invite you and your readers to my virtual book launch on Facebook on 1st June.

There will be more information on the book as well as awesome author visits and prizes to be won. You can drop in and out at any time during the day.

Hope you can come!

About the author: Katharine Johnson is a journalist with a passion for reading, old houses and all things Italian (except tiramisu). She grew up in Bristol and has lived in Italy. She currently lives in Berkshire with her husband, three children and madcap spaniel. She plays netball badly and is a National Trust room guide. 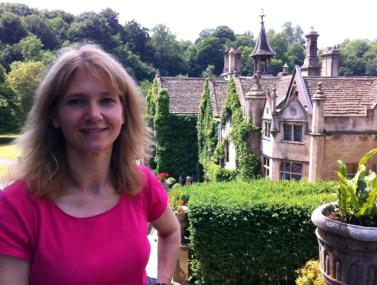 Here’s a little piece I wrote at Holmfirth Writers last week.  It’s not true, I’m afraid, but I have heard of cases of similar behaviour by these intelligent birds.

I had gone to the cabin to be alone, to get away from the maelstrom of working life.  But I wasn’t alone for long. When I had unpacked my belongings and cooked myself a quick meal, I sat outside to watch the sun go down.  A large black crow landed on the level space in front of me.  Looking for bugs and snails, I thought – there was precious little open ground in these wooded mountains.  Sure enough, it patrolled the ground with that odd, head-jerking gait birds have, and turned over a stone here and there. But it seemed to find nothing.

That’ll be that, then, I imagined. Off to the next clearing. But the crow did not fly away. Instead, it strutted towards me, stopping a few feet away to stare at me with quizzical black eyes.  “Kraa,” it said.  It walked a little to the left, then to the right, and back towards me.  “Kraa,” said the crow again.

I don’t know what it was. Probably just the novelty of interacting with another creature, maybe with an underlying hint of unacknowledged loneliness.  I happened to have a couple of biscuits with me, that I had brought out to have with my evening coffee. I broke one into pieces and threw a piece towards the crow.

“Kraa, kraa,” called the crow enthusiastically, picking up the morsel and swallowing it. Then it came closer, close enough that I could almost touch it. It called to me again, a softer sound, almost like the purring of a cat. What could I do but give it another piece of biscuit? We continued until the whole biscuit was gone and I, for my part, had eaten the other one. Now at last, as the light began to fade, the crow flew away.

The following morning, I was working outside the cabin, chopping wood, when I heard a sound behind me.  “Kraa, kraa.”

I turned around, and there was a crow. Was it the same crow that had been here last night, or another one?  Then I saw my answer. On the ground at my feet was a small shiny disc – a beer bottle top.  My crow had brought me a gift.